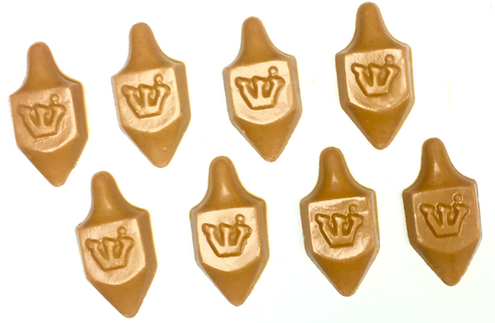 Such a nice Hanukkah gift!

Your choice of Peanut Butter Chocolate, Milk, Dark or White.

Packaged in a resealable mylar bag, (not kosher).

But why and what is a dreidel?

Dreidel is Yiddish for a spinning top. A dreidel is a pointed, four-sided top which can be made to spin on its pointed base. Dreidels are normally made of plastic or wood. It is customary to play dreidel games on the holiday of Chanukah.

There is a Hebrew letter embossed or printed on each of the dreidel's four sides. These four letters form the acronym of the phrase: "Nes gadol hayah sham," "A great miracle happened there"; a reference to the Chanukah miracle that transpired in the Land of Israel.

It is told that the dreidel, known in Hebrew as a sevivon, dates back to the time of the Greek-Syrian rule over the Holy Land—which set off the Maccabean revolt that culminated in the Chanukah miracle. Learning Torah was outlawed by the enemy, a "crime" punishable by death. The Jewish children resorted to hiding in caves in order to study. If a Greek patrol would approach, the children would pull out their tops and pretend to be playing a game.

The Festival of the Lights lasts eight days.

This festival is a celebration of the Jewish victory over the first battle for religious liberty and the rededication of the Holy Temple.

It dates back to the Hellenistic period. AntiochusIV had become king over the Hellenistic Syrian Kingdom. He reigned from 175 – 164 B.C.E. Antiochus had orders sent out that every person in his empire was to serve the Greek gods and become Greek.

In Judaea and Samaria it became forbidden, under the penalty of death, to practice the Jewish religion. Sadly many became martyrs. The Holy Temple was filled with statues of Greek gods. Pigs were sacrificed to the Greek god Zeus on the altar.

A small Jewish “army” under leadership of Judah Maccabee fought to regain control of the Temple. The Maccabees were successful and cleansed the Temple.

According to the Talmud, the Hanukkah Menorah (also chanukiah or hanukkiah (Hebrew: מנורת חנוכה‎ menorat ḥanukkah, is a nine-branched candelabrum lit during the eight-day holiday of Hanukkah, as opposed to the Jewish 7 Branched Menorah

Allergy Alert: May contain traces of peanuts Excessive Consumption may cause a laxative effective. Made in a facility that processes Peanuts/Nuts, Eggs and Sesame Seed.